Mark Reckless, MP for Rochester and Strood, today joined local residents and campaigners at St James’ Church in Cooling to reveal the results of his No Estuary Airport ballot prior to making his submission to the Davies Aviation Commission. Over the past seven months, residents across the Rochester and Strood constituency have been asked for their opinion on whether or not they support the proposals to build a new hub airport in or around the Thames Estuary.

The results are (wheeled) in… Rochester and Strood says No Estuary Airport!

The response has been extraordinarily good. Just under 8,000 residents took the time to have their say on the plans, and the answer has been a resounding ‘NO’ to proposals put forward for a Thames Estuary airport including by Boris Johnson and Foster+Partners. 92.6% of residents across the constituency do not support the proposals, with just 7.3% in favour. In Strood Rural and Peninsula wards, which would be most impacted by a new airport, the figure was even higher with 94.4% of all respondents saying ‘NO’, with just 5.5% supporting the plans.

Across the rest of the constituency, excluding Peninsula and Strood Rural wards, 87.8% of local residents oppose the plans, with 12.1% in favour.

Speaking prior to making his submission to the Davies Commission, Mark Reckless said:

“These proposals are, economically, completely unjustified. It is going to cost, perhaps, up to £100bn, and much of that will be government-guaranteed money, while all of the other proposals will be, in the main, privately funded. I just don’t believe it’s a credible proposal which merits further investigation. That’s what I said to Sir Howard Davies when I met him a week or so ago, and this ballot shows the strength of feeling against the proposals here in Rochester and Strood.

The jobs argument has completely failed. It would devastate West London to close Heathrow which would be necessary. Even Boris himself has now been pushing Stansted because he realises he hasn’t been able to gather enough support for this flight of fancy, pie in the sky proposal. I hope now we can rule this out once and for all. I would like to thank everyone who has been helping me with my campaign to do just that. Thank you all very much.”

Mark Reckless also accepted for submission to the Davies Commission a 1,800+ strong petition against the Thames Estuary Airport on behalf of the Friends of North Kent Marshes (FoNKM). 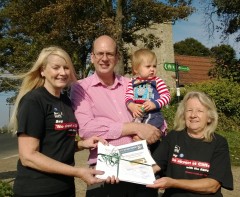 Speaking at the event, Gill Moore of FoNKM, said:

“We’re asking the Davies Commission to rule out all thoughts of a Thames Estuary Airport at the earliest opportunity and we hope he will be doing that in December. We’ve collected loads and loads of signatures alongside our MP, Mark Reckless, and we’re hoping against hope that the Davies Commission will take notice of it.” 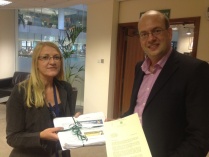 Mark was delighted to hand in the petition along with his own submission and the result of the constituency-wide ballot directly to Jillian Spindura at the office of the Davies Airport Commission who stated:

“Yours are the biggest and most comprehensive set of responses we have had opposing any airport proposal.”

5 responses to “Rochester and Strood says No Estuary Airport!”